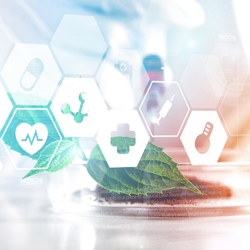 While headlines in biotech this year were dominated by the seemingly neverending pandemic, it’s also been a big year in anti-aging and longevity science. In no particular order, here is my top ten list of favorites:

CollPlant Biotechnologies, a company developing technologies and products for tissue regeneration, published results of a preliminary trial on the use of plant-derived human collagen. A gene for human collagen was inserted into a plant, yielding an injectable product that organizes into structural collagen upon exposure to light. The result is an off-the-shelf product that promotes tissue generation.

Rejuvant®, a supplement formulated with alpha-ketoglutarate and vitamins, was shown recently to reduce biological age by an average 8 years after an average of 7 months of use. Though there was no control group, the TruAge DNA methylation test is considered to be an accurate measure of aging.

We’ve been working with these very smart people for a while, and I’m convinced they are on to something big. Read how Haut.AI is transforming the skincare customer journey.

4. Longevity medicine coming to a movie screen near you

OK maybe not the big screen but this preview highlights the excitement in the field.

Wouldn’t it be cool if there was a bandage you could apply that delivers a microcurrent that accelerates healing and potentially reduces scarring? It may be here soon, and no batteries required. Your own skin generates the energy.

6. Long lasting alternative to Botox approved (or so we hear)

The name hasn’t been announced yet, so for now we are calling it Daxi. Reportedly, the FDA has signed off on the clinical studies and final approval of the manufacturing facility is the only remaining hurdle. Botulinum formulations available currently (Botox®, Dysport®, Xeomin®) all have about a 3-month duration of action for facial wrinkles. Daxi doubles it!

The TruDiagnostic biological age test has been enhanced now to include a measure of rate of aging, called DunedinPoAm. Why is this important? If you are undertaking an anti-aging program, it is important to not only measure you biological age but also your rate of aging. DunedinPoAm is highly predictive of the illnesses associated with aging, so knowing the trajectory of biological aging tells whether you are effectively changing course.

In Greek mythology there are three sisters known as The Fates who determined the lifespan of mortals. The Fate responsible for spinning the thread of life was named Klotho, inspiring the name of a very interesting anti-aging protein. Produced primarily in the kidneys, Klotho suppresses oxidative stress and senescence-associated inflammation. Klotho levels decline with age, and low Klotho levels are associated with accelerated aging. High blood pressure, early onset dementia, cancer, and diminishing muscle strength all correlate to low Klotho. If you are curious about what the Fates tell you, for $600 you can order a Klotho test, but boosting Klotho is probably not going to be as simple.

A team of researchers in Japan claim to have developed a vaccine that removes the senescent cells that build up with age. By targeting senescent cells, the so-called zombie cells that promote aging and age-related diseases, the vaccine intends to slow or stop aging.

10. Dozens of camels disqualified from beauty contest for receiving Botox

I swear this is true as far as I know, and make what you will of it: The Saudi Press Agency (SPA) reported recently that more than 40 camels were disqualified from a beauty contest at the King Abdulaziz Camel Festival for receiving Botox injections and other enhancements ahead of the event, according to The Associated Press.