Move over, anti-aging: de-aging” is where it’s at 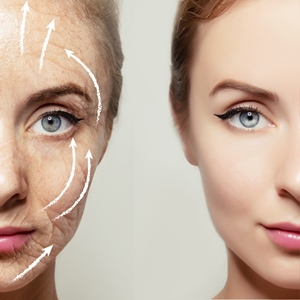 When did anti-aging become a sensitive subject? “For Skin-Care Brands, It’s Not Anti-Aging Anymore. It’s Pro-Aging” proclaimed a recent article on the beauty business. Apparently the smart companies are pivoting toward the 50+ consumer, just don’t call it anti-aging. Isabella Rossellini, released as the face of Lancôme when she turned 40, was brought back at age 63 to pitch a moisturizer targeted to her then-current age group. “The product is not about hiding your age, but rather investing in your skin health,” they say. Right …

How about instead we accept that healthy skin appears more youthful, and that the desire to appear younger is healthy. We can then focus on things that actually work rather than retooling marketing messages for expensive moisturizers. In the skin care realm, for example, there’s OS-1 from OneSkin, scientifically shown to reverse biological markers of aging in the skin. And Emepelle, formulated to activate estrogen receptors in the skin to counter the effects of menopause.

If the desire to appear younger is a crime, send the constabulary to collar Paul McCartney, who was digitally youthified in his recent video Find My Way. And better put out an APB for Robert DeNiro, notably de-aged in The Irishman. Digital de-aging is reportedly a growing business in Silicon Valley.

Why looking younger might actually make you biologically younger

Critics of anti-aging (Allure magazine won’t even use the term anymore) encourage us to embrace aging. They see anti-aging as vanity and ageism. What they overlook is mounting evidence that the desire to look young, and acting on that desire with plastic surgery and skin treatments, actually promotes health and longevity. You read that right: reverse the visible apparent age and you just might turn back your biological age and live longer.

Whatever you call it – anti-aging, de-aging, longevity medicine – it is poised to be the Next Big Thing. It is engaging some of the brightest minds in science around the world. I’m excited to introduce more of it into my practice, but I am taking care to do it the right way. If you are interested in learning more, I would be happy to send you a digital copy of my ebook Biohacking Longevity.