The surprising reason why breast implants might protect against breast cancer 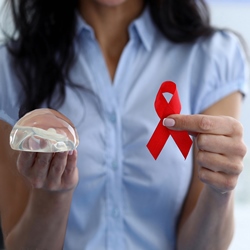 It’s an open secret that having breast implants is associated with a lower risk of developing breast cancer. With all of the recent concern about the connection between textured breast implants and ALCL (a type of lymphoma that can develop in the scar capsule), it is surprising to many that overall, having breast implants seems to protect against breast cancer. The effect isn’t subtle; multiple studies show that the odds are reduced by as much as 40%. New evidence points to a possible explanation involving the immune system and anti-cancer antibodies.

One might wonder whether it could be due to the simple fact that women who have implants do so because they have small breasts, and perhaps that was the reason. Less breast tissue, lower risk. That hasn’t been confirmed however except in women who are significantly overweight. When it comes to breast cancer risk, size doesn’t matter. But if not that, then what?

A recent study from Northwestern University School of Medicine explored the question of whether the immune response to implants leads to beneficial antibodies against cancer. We typically think of the immune system as a vanguard against foreign invaders such as viruses or incompatible organ transplants. But like foreign tissue, breast tumors also have specific antigens that our natural defenses detect in their regular surveillance. Two of these antigens, called mammaglobin-A and mucin-1, provoke the development of antibodies which help suppress tumors that produce them. The researchers found that having implants led to higher levels of antibodies against these tumor antigens.

The researchers first compared anti-cancer antibody levels in age-matched women with implants and women without, noting levels to be higher in the implant group. So far, so good, but we all know that correlations don’t prove causation. They then tracked antibody titers in women before having implants to after, finding consistent elevation. Clearly the implants had something to do with it.

This suggests that in a way, breast implants may behave like a sort of anti-cancer vaccine. They activate some of the same immune pathways that are being explored for actual anti-cancer vaccines, which have been in development for years. These aren’t yet a clinical reality, but we may be getting close (see reference 2 for a summary from the Cancer Vaccine Institute of the University of Washington on anti-breast cancer vaccines).

Certainly there remains a lot to be learned about breast implants and cancer, and it’s an important issue. Breast implants remain among the most popular cosmetic surgery operations worldwide, with millions of women having them every year. Many are also having them removed over health concerns, while many others enjoy the benefits of post-mastectomy reconstruction with implants. However controversial they may be, in the war on cancer breast implants are most often friend more than foe.