Is the golden ratio the key to beauty? 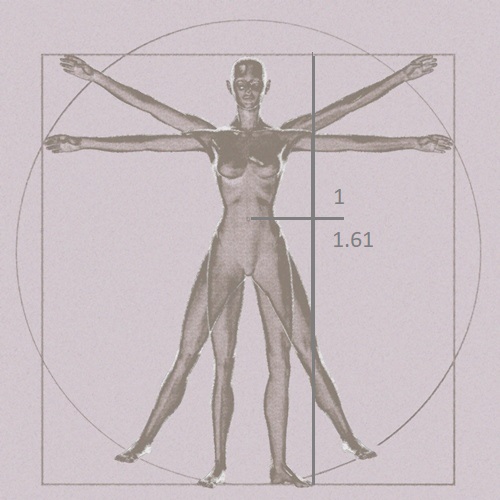 During the downtime of our office closure I read several books I had been meaning to get to, including Math and the Mona Lisa, about a concept in aesthetics called the “Golden Ratio.” Also called the golden mean or phi (ɸ), the Golden Ratio is a proportion that exists throughout nature and has used by artists for millennia. It can be found in the great pyramids of Egypt, the spirals of flower, even the

shape of the human breast. As I was thinking about how to use ɸ in my own drawings and plastic surgery practice, I decided to order a simple device called a golden ratio caliper. A quick search online revealed something I hadn’t expected: it seems the only people buying these nowadays are estheticians who do microblading for eyebrows! Your beautifully arched microbladed eyebrow might even be called a “phibrow.” Estheticians have apparently been onto this for a while.

Not everything in beauty calculates out to the golden ratio of 1:1.61, but it is surprising how many do. I’m no fan of reducing plastic surgery to mathematics though; beauty is too subjective and individualized. That’s why in plastic surgery the plan depends on the patient, not an arbitrary standard. Yet an intuitive attraction to the Golden Mean is often there if you look for it. Like microblading eyebrows, a brow lift operation for example typically looks best with the peak of the arch at 1.6:1.

Some plastic surgeons have gone to great lengths to analyze celebrity faces according to computerized phi formulas, even coming up with “top ten” lists and “world’s most beautiful” nominees (heard of the actress Amber Heard? She scores more than 90% apparently). I think that takes it too far, at least in terms of what is realistic for plastic surgery. Many scholarly articles have been published seeking solutions to quantitating beauty, and though the Golden Ratio is a common theme, it isn’t an absolute requirement. Reasons for this could be evolving standards of beauty, differing cultural norms, or the innate human desire for variety. Beauty will always be in the eye of the beholder.